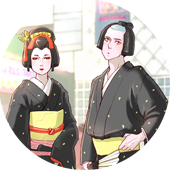 Thoughts on entertainment KabukiNo. 4
Good-for-nothings on the “street”

In the Edo period, while noh and kyogen had the protection of the shogunate, Kabuki was a thing of the street. By “street” here, I mean, not a literal piece of road or pathway, but a public space where people come and go, a space released from existing rules or systems or that allows these to be toyed with.

About a year ago, Chim↑Pom, a modern art collective that excels at using public spaces to exhibit their work in surprising and unconventional ways, made a “street” in Koenji, Tokyo. They created a street called Chim↑Pom Street inside the premises of a mixed-use building called the Kitakore Building and opened it to the general public free-of-charge at all hours. I went. It was inside a building, but it was certainly a “street.” What was unique is that the collective, who usually use public spaces as their canvas, made a public space in their private space.

But just constructing a street doesn’t make it a “street.” It has to be used for it to mean something. Chim↑Pom realized that there was a need to “nurture” the street. It feels like this word, “nurture,” contains the process required for a basic street to acquire its “street”-ness.

Kabuki has scenes set on the street, called michiyuki buyō. It is when “someone heading somewhere” in the story is presented as a dance.

For example, Michiyuki hatsune no tabi, one michiyuki buyō, is a part of Yoshitsune senbonzakura (Yoshitsune and the Thousand Cherry Trees), a program based on musical storytelling (Jorurikyogen). It, however, can be enjoyed on its own as a dance. It also serves a purpose similar to an intermission during a long program.

The characters involved are Shizuka Gozen, a mistress of Minamoto Yoshitsune, and her servant, Sato Tadanobu. Tadanobu has been ordered by Yoshitsune to guard Shizuka, but, in reality, he is a fraud, a young fox transformed. The young fox’s parents have been turned into the hide used for Hatsune, the drum Shizuka possesses (how horrible!), and that is why he is admirably attached to the drum and hovers around Shizuka in the form of Tadanobu.

Shizuka, for her part, thinks only of her love, Minamoto Yoshitsune. Tadanobu, for a short while, dances with Shizuka in place of Yoshitsune. Tadanobu goes on to reenact the battle in which they destroyed the Heike, the enemy. They both tear up at the scene when Tadanobu’s older brother Tsugunobu dies in battle—“Wait,” we realize, “you’re not the real Tadanobu, you’re a young fox!” But this is a “street” set on Yoshinoyama. The brief suspension of the setting of the story to insert a little bit of play is what makes this michiyuki interesting.

It’s said that tracing michiyuki back to its roots would bring us back to the meandering and traveling of the ancient deities. For example, Kojiki and Nihon Shoki contain expressions of Yamato Takeru as he describes the locations he passes as he goes to attack prominent clans in their domains. Perhaps it is deeply intertwined with confirming the identity of the community, of where we all came from.

Eventually, expressions of michiyuki came to be a symbolism in literature, performing arts, and music along with the development of major routes connecting, for example, the capital and Azuma no kuni. Then, interestingly, expressions increasingly came to focus on people who are not a part of or are falling away from the community.

Nobility who lost their power struggle. A man and woman who cannot end up together in this world and have lost their way. The latter is well-known, for example, in double-suicides in the works of Chikamatsu Monzaemon. The time and space remaining for a man and woman whose hopes of living have been lost are packaged beautifully along with a location name infused with affliction. Where they are heading is death, but it is also the way to the unknown community, where they should be able to be together on the other side. (Incidentally, Kan Takahama, the manga artist who draws the lovely illustrations for this series, has a masterpiece called Cho-no-Michiyuki, based on the Kabuki dance Cho no michiyuki. Be sure to check it out.)

The act of watching a Kabuki performance seems somehow similar to michiyuki. In theaters, we are affixed to chairs, but, as with Chim↑Pom Street, a street showing our inner selves is opened up. Falling out of the community we are used to, we fall into a new community. In that momentary space, that grace period, anyone can have a little experience of being “good-for-nothing.”