No. 2
The dynamism of the hanamichi [英文] 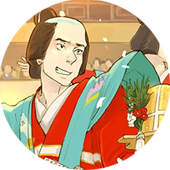 It was when I watched the program Kotobuki Soga no Taimen (The Felicitous Soga Encounter) at the Kabukiza Theatre.
Kudo Suketsune is an important statesman under Minamoto no Yoritomo and has been appointed to head a hunt that is to take place at the foot of Mt. Fuji. Many feudal lords and courtesans (Oiso no Tora and Kewaizaka no Shosho) have come to Kudo’s residence to celebrate.
Then, with a jingle, the agemaku rises, and two young men enter the hanamichi. They are the Soga brothers Juro and Goro, sons of Kawazu Saburo, a man who had been assassinated by Kudo.

On the Kabuki hanamichi, the spot that is 70% of the way from the agemaku to the stage (with 30% of the way remaining) is called shichi–san “seven–three,” and an actor usually makes some sort of movement or strikes a mie there in most programs.
Some say that, previously, shichi–san referred to the opposite: 30% of the way from the agemaku, closer to it than is now the case. I suppose we could call it “san–shichi.”
Either way, the actor stops partway on the hanamichi once to draw all audience eyes to him to create spatial tension, literally increasing intensity.
Come to think of it, the popular ‘pro wrestling ringmaster’ Keiji Muto and ‘talent that comes around once every 100 years’ Hiroshi Tanahashi both strike a pose at the san–shichi position on the long hanamichi when they enter.

The hanamichi, the device that creates oneness of the stage and the audience.
It’s not just that it doesn’t grow old. Kabuki is filled with similar techniques to build hype in the theater space that has even become adopted in other genres.